Past week – focus on meditation

Yes, as I promised I will write down the little good things that happen in my life. I also put some goals from the beginning of the last week, such as being in the computer max 8h, studying at least 2h a day, meditating every morning. The first one is the hardest 🙂

Monday, 22nd February- the beginning of meditating – i keep falling asleep :), but waking up earlier meant that I managed to do a mascarpone-whipped cream-chocolate mousse before going tp work. It was delicious!!!

Tuesday, 23rd of February -Since it was a shortened work-day, we decided to have a game called “Europe” with our colleagues, drank champagne and played the game, I won the first round and lost the second. But it was so much fun. 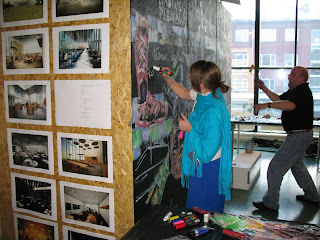 Wednesday, 24th of February – the Independence Day of Estonia. Since my mom was going to translate in the President’s reception she was a bit nervous and I had the chance to massage her in the morning. I like massaging people. It helped her. We had a nice family-breakfast. The day continued to be a great one with the exhibition opening in ENM. You can see me writing on the painting that was made LIVE on the opening.

Thursday, 25th of February – My course of computer graphics started. New things to learn! Smell of spring is here… hope the snow melts soon. A fellow jaycee advised me to get my feet under my butt and come to action :). Thank you!

Friday, 26th of February – back at school, learned a lot of practival things about communication strategy and I was made a proposition about personal branding discussion. I’ll let you know more about it when it is done ;). I also registered my website www.persoonibrand.ee, now I just need to see where it leads…

Saturday, 27th of February – finished the book about Sting, loved it, it also confirmed the fact that to get where you want to you need at least two things: passion for what you do and the willingness to CONSTANTLY do it.

As for goals set and mentioned in the beginning: I did meditate all the mornings, 2/5 days I did not manage to use the computer in 8h, so that’s a bad thing, and I did study every day round 2 hours.

Thats a short summary. What good did you do the past week? Any plans for the next?