The day and night of the Harlem Shake Ibiza Style

Who said winters in Ibiza are boring and if it rains, people do not do anything? 40-50 people proved otherwise by taking an hour in rainy day of the Balearics on 1st of May to get their shake on doing the Harlem shake that has recently gone viral in Youtube videos. I hadn’t heard about it before. But it took flames fast in Ibiza related Facebook communities, when Jillian, The Ibiza Fixer called for Harlem shakers. Ibiza style.

Ibiza style should have been maybe in bikinis, sun and Es Vedra as a backdrop, but that needs to be done on second try. It rained cats and dogs on that moment we all needed to go out and dance, but still we managed to get a decent video and most of all – enjoy making it by shaking, dancing, laughing going mad like with our grooves. I am not that recognizable in my pink gear, but my lovely pink hand luggage was standing proudly and steadily in the middle of all.

Before we did the shake, I went through the information about the background of Harlem shake and found the tutorial of Harlem shake. Our shake was really far from it. And no disrespect to the real shake, I think the dancing, whatever the name or style, is to be enjoyed and anyone can dance however they feel like they want. And if it goes viral – the better.
Especially here in Ibiza you find out how important dancing is as an expression of oneself. Just go to the clubs, especially local little clubs like La Kokotxa where you see how everyone is dancing from their hearts (not the drugs or alcohol talking or I am just naive). 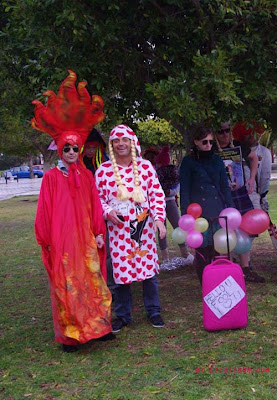 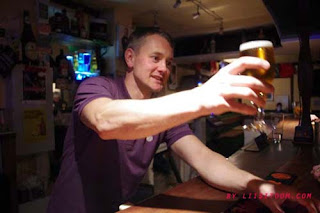 After an hour in cold, rainy weather we all deserved a nice (warm) drink and a moment to reflect. For that we went to Father Jack’s which is a nice Irish pub in Figueretas area. I think I might start having my evening writing hours there, because the WIFI was good, atmosphere homey and they serve Strongbow. Oh, and Simon was cute :). 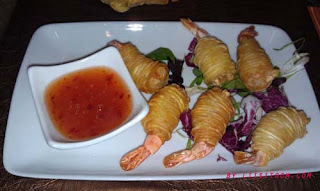 But the night was not over for me just yet. Father Jack’s visited, we, Nora, a new friend who is here for trainee-ship for a month and a local Brit Brian went on for a tapas and parties tour. I really need to get used to that parties start somewhere around 1 am. I was tired by that time, but still we held on until 3am. For tapas we went to Ke Kafe which has the most beautiful, in design and taste, prawns in potatoes. It was just amazing…yeah. Amazing.

After late tapas, we headed to the Marina Botafoch – passing the Harlem shake place which will now and forever have a special place in my heart 🙂 and towards the MishMash club. By accident we found that Sushipoint Ibiza was having a private opening party which we crashed and had a taste of deserts, nice music and made sum pictures of ourselves. Also, the lovely girl who welcomed us put us on the list for the real opening the next day. She had an amazing memory, being able to remember my name and face when I left and also the next day, when we went for the real opening. Cool, lovely welcome.

The first opening held, we headed to MishMash, the place we were originally planning to go. Quite a few people dancing, drinking and chatting already. It was like being in somebody’s living room. They had a wonderful exhibition out with the pictures painted by Margot Jabbour whose paintings you can see here. My favorite was a girl with boxing qloves.

When clock stroke 1 (or was it two?) we headed to the Bubbles, which was literally next door. It is more like a small night club, quite open and simplistic, yet cozy and it was easy to just start dancing. People were going back-and forth from bubbles and mishmash. With an hour, the room was filled up with people. So around 2-3 am is where party starts (mental note made!). And we were ready to go. Beginners. But to our defense  the next day we held on until 4 and started at 22!

So this was the first party night in Ibiza. First in many to come. I am looking forward to seeing the big fiestas in big clubs like Pacha and Space and also small local parties, hanging in the pubs with friends and going for the after-after-after parties at 7 am. Just need to build up the stamina for it. Party evening-night-morning in Ibiza seems to mean late night dinner with friends, followed by some relaxing, smaller club-pub, followed by a bigger and more dance-orientated club and then some more of those and then,. . . well, I was out until 4 am only, so I do not know what are the next steps, yet. But I will keep you posted.

PS: The pictures of the making and the after-party of the shake are here in Facebook.