To be an Estonian – Estonian Minute

Ernest Hemingway has once written, that there is an Estonian in every port

For example, I am currently in the port of Ibiza, Spain. I have not met (m)any Estonians here yet, but I am sure there are plenty here, there and everywhere else in the world (even though the population of Estonia is less then 1,3 million people). We keep ourselves to ourselves and unite when there is a need, real need. But the ability to travel around, take in the different cultures, adapt in new situations, learn and grow, and then return or keep spreading the word about our little nation, is something great that this Republic of Estonia has and always has had and always will have. This ability makes us the most European, or Cosmopolitan of all, yet keeping the light of our traditions inside ourselves. And the development of technology Estonians are so keen on. Thanks to that, I can feel like I were home(=the ground of Estonia) – I have movie nights with friends via Google Hangouts, watch Estonian Independence Day reception online as it happens, talk to my friends and family via Skype. It’s almost like being there.

Estonians have endurance written in their DNA. It is no joke that in the comedy “Malev” made about the history of Estonia and its battle for freedom, it ends by Estonians “winning” and as punishment for the Germans we took all the work from them. I think it describes Estonians rather well – we are working people. Stupid or not, but that is what we do. We are a nation that can do and value things made by people (the irony, ey, with all the focus on IT at the moment). 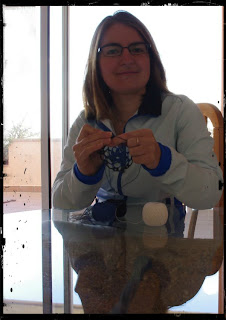 For the celebration of Estonian Independence 95th anniversary (Eesti Minut – Estonian Minute picture collection action by the Estonian National Museum) I made a picture of me doing some crochet in the colors of the flag: blue, black and white. I love the fact that we can still make things with our hands, that we value it, that we value a person’s time and effort and the love put into the work. There is a lot of problems with employment these days, also in Estonia. I would like to think, that everyone, in the end, chooses the job she or he wants to do and spends most of his/her time awake doing things that he/she cares about. Be it bringing up children, teaching, office work, politics, developing apps or travelling around and blogging or any other job. There is no mundane jobs – there is a wrong person for the wrong job then.
I wish for this anniversary, that whatever you do, do it with love, do it with care and attentiveness. Do it for the love of DOING something great. No matter how small it is. No matter if it seems to bring in money or fame or not.

Deep within – the identity of an Estonian

I am an Estonian. My grandmother is Lithuanian, my mother is born in Siberia, the beginning of my adult life and further on is influenced highly by Norway and I wish to grow roots in Spain. I think and write in English, live in Ibiza. So who am I? The question of identity for Estonians is another core struggle that defines us by being what it is. The struggle to find the “right” identity, we have gone from on Union to another. In the end, I don’t think neither of the Unions can define us. We are something so much more. And that is what makes Estonians “dangerous”. Being an Estonian does not fade, being an Estonian is like having the X-factor. You just know it, or don’t.

The World of People

Having said all that, I still think that we are not the only nation who can say similar things about themselves. Which leads me to conclude, that no matter the nation, it is about what you create in life and of yourself. You, individual together with other individuals. I like the Aussie saying – We are one, but we are many. The world is so mixed up when it comes to nationalities, that we should not try to define ourselves anymore by it, but more concentrate on a purpose. We need new bases of identification.

A lifetime to create

95 years is a lifetime. The birth, the teenage struggles, the settlement of adulthood, accepting and finding new things in old age. For a country, this is just a start. I hope that the independence and freedom that is written in independence does not make us lazy and make us forget about what freedom stands for. It stands for responsibility – responsibility to create your own life and responsibility for your own actions. No matter the country, no matter the nationality. We share the sky, we share the same opportunity to say” The sky is not the limit!