National costumes of Norway – Hardanger bunad is my choice

In search of the right Norwegian National Costume – bunad

For some funky reason I am very into Norwegian national costumes “bunads”. I started to invest in it last year when I bought the first silver brooch that goes with Vestland or any other bunads in Norway and continued with the earings this year – they are not cheap. Anyway. Today I decided to go for the Hardanger bunad (which means I might have to buy new brooch, golden plated). The bunad should look like that (picture taken from here, for those who want to buy a bunad as well):

So one day, I will be taking part of a 17th of May celebration in the bunad. In 10-20 years, maybe :). If there is someone who wants to inherit parts of a bunad from Hardanger to me, please contact me :). My gratitude would not have an ending.

Considering my roots, I should also get a national clothing from Tartu-Maarja, Estonia and Lithuania (not sure the district).

Today (2013), I have collected a broach, ring, earrings and now two pieces of the silver belt. I also have re-checked what kind of a bunad I will be having. Since I bought silver jewelry, I cannot have the bunad you see above. The festive one. I need to get the winter bunad instead. And I like that one as well. 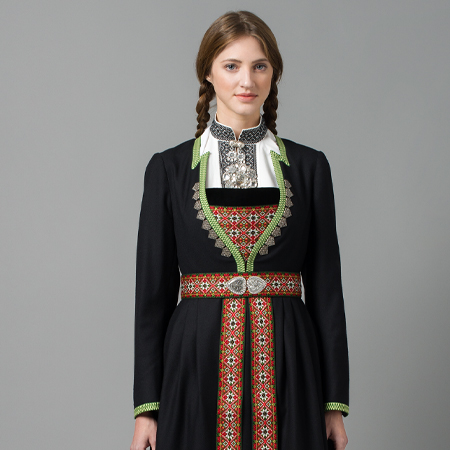