Posts about Ibiza in my blog

A little something about Ibiza

First settlements of Ibiza and Formentera date back to over 3000 years, you can find a grave in Formentera from 1600 BC, cave paintings in Ses Fontanells 800 BC. Cova de Can Marca is more than 100 000 years old cache point for smugglers.

I 654 BC Carthaginians discovered Ibiza and founded Ibiza Town – one of the earliest in Europe, an island was called Ibossim. Greeks called it Pitiusas – the pine covered islands.

Carthage is a city in Tunesia, Romans called them the Punic folk. They were merchants, traders and during their time, Ibiza became important trading center. Already then the salt of Ibiza, “White Gold” was exported. Salt was derived through process of evaporation. Carthaginians left the burial grounds in Ibiza which are the largest Punic artifact collections in the world.

“Carthage must be destroyed” – Romans went to Punic wars and in 123 BC conquered the Balearic Islands. Romans called Ibiza Ebusus. Island retained independence from the Roman empire as confederation town.

Between 5. – 9. centuries A.D. there are large gaps in the history of Pitiusan islands. During that time Ibiza was invaded by Vandals, Barbarians, Byzantines.

8th of August 1235 Catalans conquered Ibiza. They named villages after Christian saints, churches were built. Other part of churches were built in 18th century. The Medieval Festival is held every May to honor the tie 1000 years ago.

Ruling Catalans from the mainland Spain neglected the island during following centuries. That time pirates started coming to Ibiza. 16th century Calvi, an Italian architect finished the work on the walls of Ibiza Town.

Terraces are built to conserve soil. In springtime the seaweed, poseidonia, is collected, mixed with silt and leaf mould from under carobs. The seaweed gives boron.

Pirate towers are built between 16th to 18th of century, they were occupied by two watchman who raised the alarm with fire during night or smoke signals during daytime when they saw pirate ships or hostile vessels approaching. Civilians would refuge in equally fortress-like parish churches or hide in caves.

Towers were well armed with a small canon, defenders pouring boiling water and hot pitch onto the attackers. The ground floor had two rooms, 1 for ladder and one for gunpowder.

There are nine remaining towers. The later ones are more for military reasons, able to provide active defense, early ones for the observation of the sea.

Why was Ibiza interesting for pirates? It lays between Africa and Europe, it is a place to break the travel, it has fertile soils, rich harvests, salt.

You could see that the surveillance systems for protection of the island was necessary by the look-out points on high places used by 2700 years ago by Phoenicians.

Tanit, a well loved and still cherished goddess of Earth. 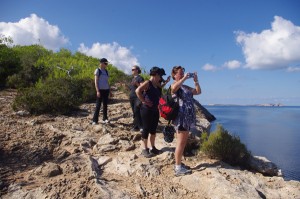 What is Walking Lifestyle in Ibiza?

Walking lifestyle community is created to promote walking, offering walking knowledge in Ibiza and advice for an active holiday. Walking is about having an active, fit and adventurous life.  Walking is an easy yet rewarding activity and especially great in Ibiza weather and terrain. Take your friends and come walking in Ibiza – for training, for leisure or for culture.

There is so many reasons why one should consider walking in Ibiza, here’s only few:

Why go walking in Ibiza:

* walk and tan: sun is important on vacation. Join for walk-and-tan routes that go via different beaches AND you see the nature, beautiful sights and have fun with your friends, team or network with new people;
* walk for fitness: walking routes in Ibiza are from easy to medium difficulty. You can always make them more difficult by making them longer, perfect choice for people who consider walking as a great way to exercise;
* relax and disconnect yourself from the outside world;
* see Ibiza nature, culture and lifestyle;
* just walk and enjoy life, your style! 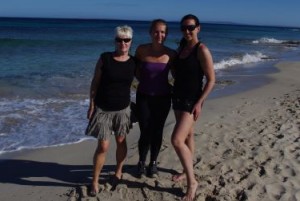 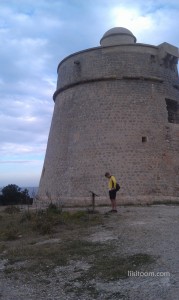 Go walking in Ibiza in your style

If you want to create a habit of active lifestyle, there is no better day to start than today. It is always easier to start a new habit with other people who support and push you a bit, so come along! Join regular walks in Ibiza or ask for a custom made walking route for you, group of friends or a team.

Walking in Ibiza will take you to beautiful sights, walking routes suitable for your level of preparedness. It will be a chance to disconnect and build strength!

Ask for more information and routes for walking in Ibiza at liisitoom (at) gmail.com or see the blogposts for suitable routes.

Want to live your lifestyle? Lifestyle coaching is for your then.