Last week, taking the initiative of Rob Smith, the author of Secret Beaches: Ibiza and the forthcoming Secret Walks: Ibiza, I cleared up my first old and (almost) lost pathways in order to re-open a traditional walking route on Ibiza. Walking in Ibiza and its routes are an important part of the heritage of the island and they deserve to be saved for future generations. We hope that you, other walking groups, locals and visitors will join the mission, because a lot of work is yet to be done.

Walking routes in Ibiza are a local treasure

Even as recently as the 1960’s walking was one of the main ways to travel on Ibiza. Thanks to those times, a large network of pathways were formed by the island’s residents, inland and along the coast, in order to visit one place or another.
Nowadays, with convenient public transport, cars and motorbikes, the old walking routes in Ibiza are neglected. One by one, they are becoming overgrown or blocked by fences and thus lost to local hiking and walking enthusiasts and to visitors who come here to seek the true nature of Ibiza.
There are areas under protection in Ibiza that are taken care of by the government like Ses Salines Nature Reserve / Park. But help is needed to focus and clear the other pathways.

There are walking groups who value the nature, walking traditions and promote walking in Ibiza – and thankfully keep a lot of the routes alive by walking them. The routes used are mostly the same and therefore, the lesser known, wilder pathways need to be communicated and brought into public use again. We hope to get more information about pathways that need clearing  from the locals who used to walk those paths, Rob has found many of these routes with his book research, and over the next months, we (hopefully with you) will be clearing then and re-opening them one by one.

It takes only a decision to make a change

Rob Smith spent over fifteen years working as a self employed cartographer back in the eighties and nineties. He has published maps for the National Health Service in the UK, local councils, festival and party organisers. In 2010 he undertook the research for his first guidebook Secret Beaches: Southwest. The book being a success led him to Ibiza at the end of the summer 2011 to research another book.
While he was undertaking his research on Ibiza he discovered the hidden valleys and forest pathways that are surprisingly little used and unknown. Now, he is back on the island to carry out deep research within Ibiza’s inland and coastal forests for his latest publication, Secret Walks: Ibiza. This is where I met him and our mutual interest to walking in Ibiza led to make the decision to actually start clearing the walking routes in Ibiza. 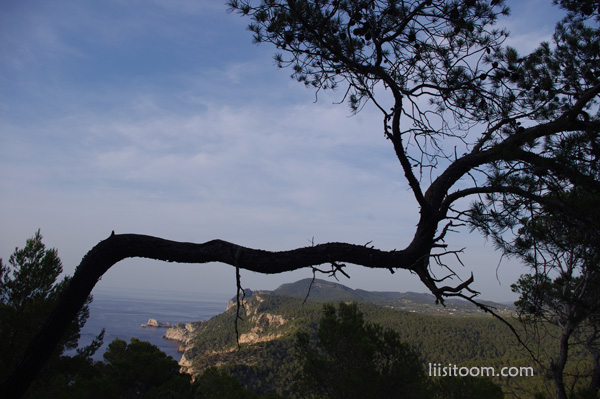 Long story short – this research and all Rob has found out (local people’s reactions included) made him decide to start clearing the once used and now lost walking routes in Ibiza. Many were used by the old Ibicenos who made the limestone kilns up on the top of mountains, others by hunters who tracked animals in the forests and more by local fisherman to access their boats along the coast. In Rob’s opinion (and I agree 100%), they are one of Ibiza’s biggest assets and should be cherished and protected like other important heritage.

I started Walking lifestyle Facebook, blog and community with a mission to promote an active lifestyle, thus, it was an easy decision on my part to join Robert and his idea to clear the paths. Especially when the first path he suggested was Cap Nunó, a walking route I have thought of doing for quite some time (My one favorite is Punta Galera walk in Ibiza and you can see Nunó from there …) .

Clearing of walking routes in Ibiza no 1: Cap Nunó

Just north of Cala Salada and a little west of S. Agnes is an impressive 258 m peak called Cap Nunó that teeters on the edge of the Mediterranean Sea. On the south east flank, a clear pathway winds up to the summit where views across San Antonio Bay, Cala Comte and Sa Conillera are the most impressive on the island. This special place and the route to it are well used and known to many locals and seasoned tourists. However, what most do not know, is that there is a short stretch of indistinct pathway that runs down the north east face. This important path connects Cap Nunó with an extended circular route into the forests south of S. Agnes where ancient crumbling terraces topple into valleys that are saturated with the wonderful scents of pine and thyme.

Only few days ago, this tiny sendero (pathway) was seldom used and because there was not a defined track for the most part, the occasional users were making detours and routes through the undergrowth, creating a wide area of forest which was susceptible to damage.
On Saturday, 29th of June Rob and I cleared and cleaned this lonely pathway so that everyone can enjoy it. You will recognize it from the yellow markings and, well, from the clear path that starts on top of Cap Nunó or if you come from below, you will see the yellow stones on the small dirt road.
We started the clearing with a beautiful Ibiza sunrise, taking our coffee on the mountain top – followed by 6 hours of hard manual labor. But the result was amazing – what was before a impenetrable pathway is now a visible, relatively broad and clean path down from Cap Nunó. Beautiful sights, lovely walk, some challenging parts to satisfy the more serious hikers and of course, connection with the rest of the forest to the north east.

It was a great feeling after we had finished the wild gardening, the clearing of our first, first of many walking routes in Ibiza

Tired and scratched by the brambles and pine needles, but with an overpowering sense of achievement brought about by the knowledge that we will bring enjoyment to many hikers and walkers. We hope this and future re-opened routes will be used by both local walking groups and commercial walking guides in Ibiza, so that they stay alive and easy to follow. 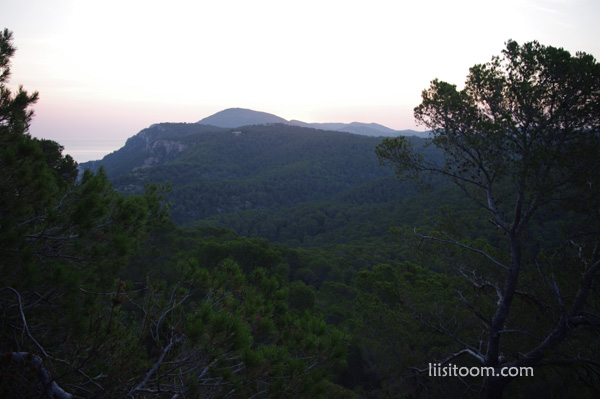 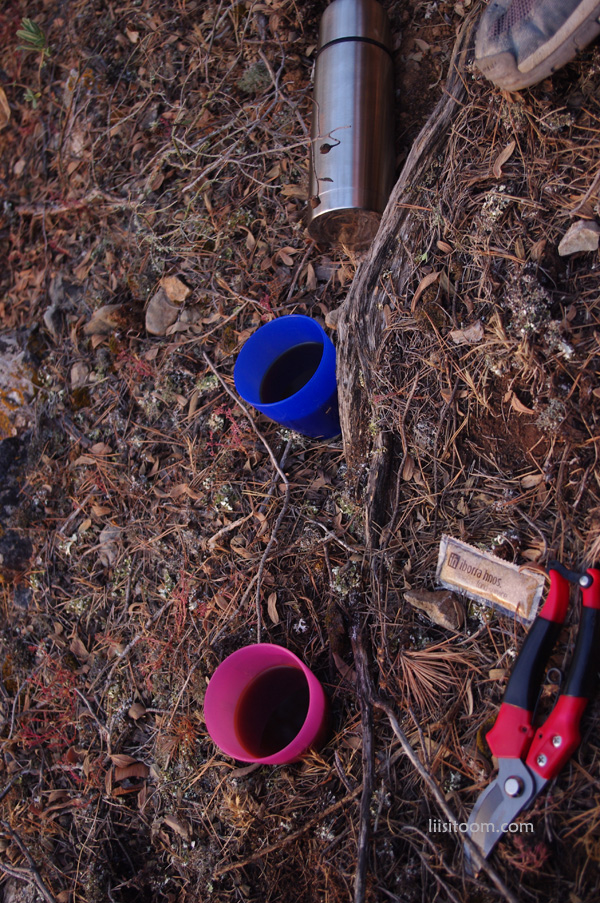 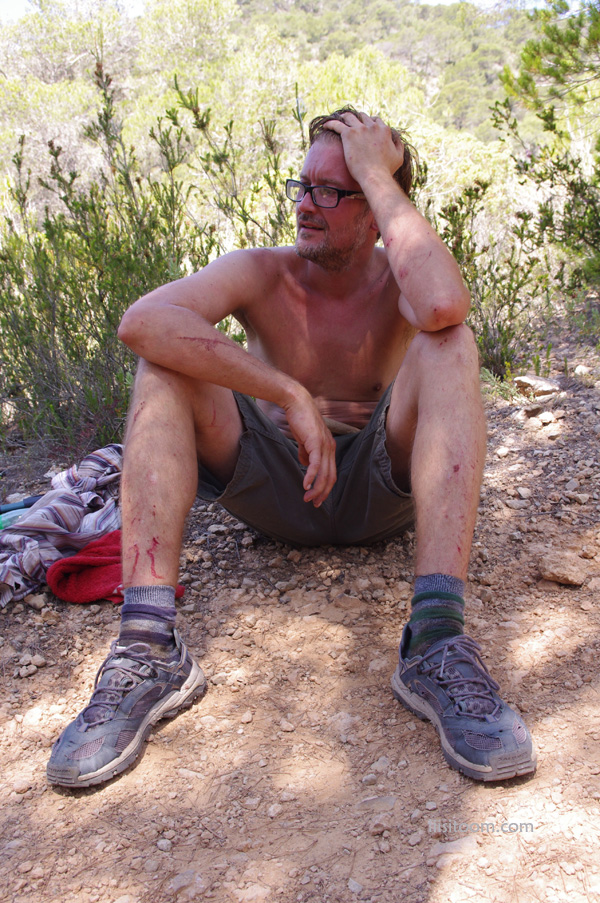 Walking routes in Ibiza are for everyone

So why have we done this? We enjoy walking, we love the island of Ibiza and we believe that when you use something, you should always give back. Walking routes and walking lifestyle should be open and available for everyone on the island. The blue triangle markings that the German walkers have created have been a great help for many people and there are routes you can follow provided by the city government.
But it is still difficult to go on a walk and find new paths. Most of the routes are still hidden away and in a sense controlled by the people who have the information. If we want to show the visitors of Ibiza the real assets of the island, the nature and culture, the walking routes should be more visible and public knowledge. We hope that our initiative will bring the local walkers together in an effort to save the paths and in turn, mean that more walking enthusiasts will visit the island.

What can YOU do?

Some years ago, Menorca’s coastal pathway called the ‘Camí de Cavalls’ was being blocked by fences and walls erected by land owners who wanted private access to the sea. This historic path had been in existence for millennia, being first created as a watch defense for pirates, then more recently used by the military during the wars. The local councils and government would not listen to the minority that felt the path was important and should be cherished. But all that changed when a large group was formed by a handful of passionate individuals and they stood up together and said in unison…No More! The Camí de Cavalls is now, once again, an uninterrupted walking route that circumnavigates the whole of Menorca.

Everyone knows that Ibiza has changed beyond recognition over the last few decades and the changes look like they are continuing with great speed. The island’s countryside and forests are very fragile and and have already suffered greatly with these changes. We feel that perhaps it is time for the residents of Ibiza to do the same as the residents of Menorca. There is certainly and ‘now or never’ urgency to the problem. Therefore, we are committed to putting our time and effort into making people aware of the issues that are faced and hopefully building a large enough group that will eventually save Ibiza’s old pathways and caminos from being lost forever.

The clearing of the old routes that we are doing right now is just a small step towards this goal. But the first step is always the hardest and we need your help:

1. Go walking in Ibiza, keep the pathways alive, and donate your time to clear the new routes.

2. Write to us about walking routes in Ibiza you know that are lost or on the verge of being lost, again, liisitoom (at) gmail. com.

3. Spread the word of this mission by liking/sharing the Facebook page, talking about that to your friends, asking people to share the routes and cooperate together.

And to finish – a video of the last minutes and last cairn we made on when clearing the Cap Nunó walking route in Ibiza. Hope to see you soon! 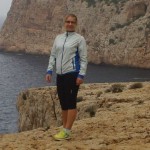