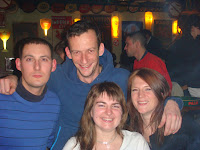 Yesterday I had a great chance to meet the fellow jaycees in Brussels (actually they all were from Ronsee) and I was taken to a pub called Delirium which has 2004 beer types in its menu. I had a chance to try lets say about six of them. Some funnyly named like Satan, something with Flower (passion fruit in it), a beer with cherrys… well, when the pictures come, you will see yourself.

Anyhow, it was my first real encounter with beer, and I must say I quite enjoyed it. In top of that I managed to see a well h 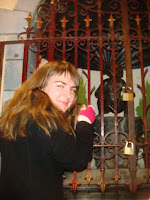 idden and well known sight: the pissing girl. The pissing boy is a major turist sight, out in the open, but the girl is hidden away (like a good girl should). So when you want to see her, let me know, I have connections ;).

But its my last day in Brussels, so I better go out for a coffee, bookstore, chocolate museum and shopping for goodys.