Looking for the Prince of Norway

The first day in Bergen went as usual. Studying, closing up things not finished at home. I also received the paper where I will get all the stamps from passing the 7 mountain points. It was so cool to see my name and an Norwegina address :).

Helen did go downtown, even though it was raining quite a lot. She is tough. Spent the day inspecting the shops and getting information for the rest of the trip.

At 8pm we met up to go to take a beer and get introduced to the nightlife. Since I was driving, I went wild and drank an orange juice made of 6 oranges at Zacharias at the famous fishmarket which is rather ugly now with all the tents (for health reasons). Anne-Ly told us to not look in the eyes of boys unless we want them to start talking with us because it is very easy to get to know people in the city like that. Her words were proven the night before when we were just passing by Bryggen and suddenly two guys just stopped us (at 9pm, Thursday!) and asked if we would like to do something interesting this evening. 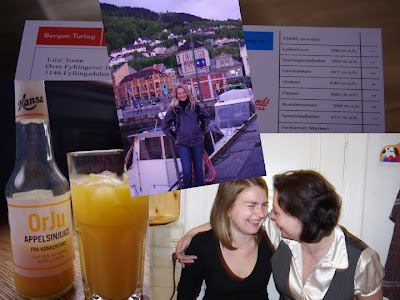 After Zachs’ Helen took a bite from 7Eleven and we went to a nice and famous bar Sjøboden. It is a nice small place with live music. We were quite early there so it didn’t get so full as I emebered last year, but people danced (swing) and were having a good time. There you could see clearly taht when you locked your eyes with someone, it was guaranteed that they would get closer to your table. And that guys were walking by tables to see if the catch someones eyes. Interesting. Anyway, the age range was a bit too old for us so we continued to Scotsman.

I don’t know if this rain was stopping people from going out, but even that place was kinda empty on a Friday night! But at least there was nice dance music and younger people. But at the most fun time, afirealarm broke and we had to go outside. We took it as a sign for us to go home. Unfortunately we did not find our Prince of Norway from those places, but the trip is still in its beginning.

Since we weren’t really tired yet, we started eating and talking, made some Mills-Majones pictures and watched Paradise Hotel til 5am. Now it is time to prepare for annual Grill & Chill at Connie’s.