Science and innovation in MeDiA part I 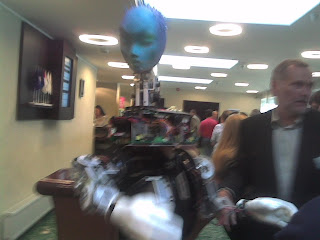 Today I had a chance to take part of an interesting conference combining many of my interests: innovation, media, science. It was a gathering of many important actors from all of those forementioned areas, starting from Tiina Kangro, who is a chief editor in one of the newspaper groups (and many other titles), Mart Raudsaar, a professor in the journalism and communication institute in Tartu University, participants were from many PR sides of science, professors, entrepreneurs etc.etc.

I will try to share some good points I got from the different lectures:
1. Margus Maidla – a journalist in one of the radio science programmes: why it is difficult to get the scientists to talk in a way people would understand: cos that would requier simplification, simplification in science means modification and modification in science is as criteria of not-full-truth and thus is bad. He mentioned that science journalism is different in many countries and mentioned Danish and Finnish associations.

Main point: Science journalists are scientists’ best allies, they just use different means. Already here a question of PR people raised. This topic never really got a good coverage.
He mentioned a ethics code of a scientist where it is said that a scientist must popularize his/her work. (the code of ethincs in Estonian .pdf)
What is the center point of the science media: a journalist wants the RESULT, sciencepublications show the processes.

2. Mart Raudsaar said in the very beinning that science university is a dead end if it is not put into practice. Here can media help. He also used Joseph Schumpeter and his definition of innovation – Innovation is not necesarily an invention. It can be using things already excisting in a new way (like for example pencils to digital pencil etc.). He brought in clusters as a means of giving speed to innovation, it is important to get scientists, politicians and journalist round the same table. This is somethin Estonian National Museum also tries to do (and always has, I think).

3. Enterprise Estonia has financed two sciense-related free magazines HEI and Inseneeria, I ordered one of them for myself :). the representative gave a good thought: If you have an apple and I have an apple and we share, we still have one apple per person. If I have an idea and You have an Idea and we share them, we both have TWO ideas.
And I got a new concept: attention economy.

I will continue in another blog post soon. Too much information in one go is not good 🙂