The Gardener in Me I never Knew Existed 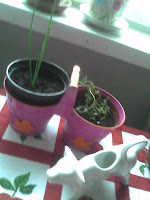 When my dear granny was alive, I used to hate the fact that she had sooo many pots of flowers and green stuff in her flat. But she was really good in growing them, all the flowers that were about to die on me or my mom were taken to her and she would bring them to life.

Another annoying thing was that when she did give/throw some flower away, she would make at least 1-2 new of the same. Really annoying when you want to lessen the amount of pots in a small two-roomed flat.
Now, when now I have the possibility to give the flowers away, which I have used to free the flat from half of them. The other half is still here, partly cos they are not yet taken away and partly (yes) cos I wanted them to stay. And now I have realized, that there is one flower (the pink one) that there were two of and I gave one away and now I have 3 left . . . so… never say never. By 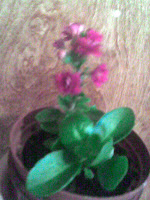 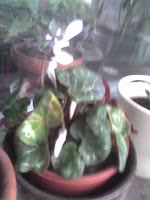 And to my surprise I just found out tonight that one of the hardest growin flowers has started blossoming! It was my grannys trademark! Thats the white one.

What does this MEAN???